One of the best things I ever did with my training for endurance events was to hire a great coach. After more than 10 years of self-coaching, I finally decided last year when I signed up for Switzerland’s Inferno to seek out an expert who could guide me in my preparations and help me reach a new level. It was such a great experience working with Lisa Smith-Batchen in preparation for the Inferno that I knew I wanted her to help me prepare for the Marathon des Sables. She’s a great online coach and it’s a huge bonus that she’s actually the first and only American female to win the event in its 18 year history!

Lisa’s MDS plan for me started last fall. Coming out of the Inferno in August, I had a strong base which helped me enjoy some great road and mountain cycling in the Alps through October. 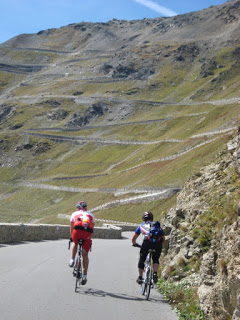 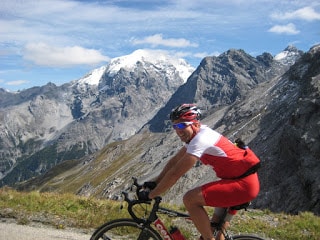 As cycling season drew to a close in November, I started back on a running-focused training regime aimed at preparing me for MDS’ distance and climate extremes that to this day I still can’t comprehend. A key fundamental to Lisa’s programs is core training, so in November I joined a gym in Zürich and started back on core and strength training work. I met a great local trainer (Ivo) who helped chart out the details of my core and strength work to fit into Lisa’s overall plan for me. Ivo introduced me to several new tools to aid in balance, stability, and core strengthening. I moved away from weight machines to the use of dumbbells while simultaneously balancing on squishy rubber steps and wobble balls. I also learned many new exercises using my own body weight on the Swiss ball. This core training approach gave me renewed energy and motivation for these requisite indoor sessions, while Lisa’s overall program placed me on the perfect trajectory to meet some big training challenges that would occur during the final few months before the race. 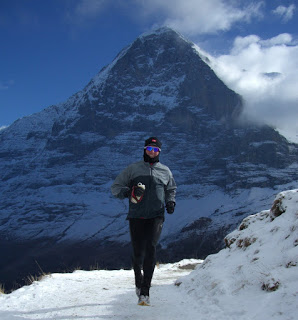 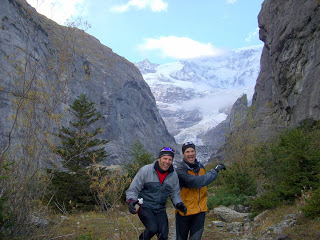 By December, I was doing a 4-5 hour run per weekend — often with at least half of the run in the early evening winter darkness and often in the snow. In addition to the weekly long run, each week I also ran a couple more times, did 1-2 strength and core sessions, did some indoor cross-training, attended a weekly yoga class, and skied on the non-long run weekend day. (Note: This is roughly the same routine I’ve followed through January, but the volume has increased.)

In December, I introduced a backpack to my runs (“Backpack, meet Jeff’s running — Running, meet Jeff’s backpack. I hope you both get along – play nice.”

I like my new Raid-Light pack so much that introduced it to my cooking as well. 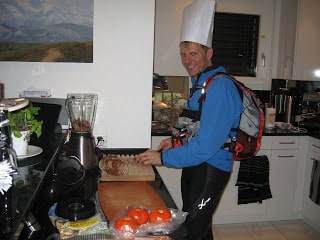 I started with just a few pounds (1.5kg) in the pack, but by early January it was up to 20 pounds (9kg). I’ll write more about backpack running in future posts. I also added some new activities — skate skiing, ski touring, and schlittenfahren (sledding)! This led to some really intensive weekends, where I would run long on Saturday, ski (up-hill or skate style) on Sunday, and try not to break my neck while polishing off the weekend with a sledding run. 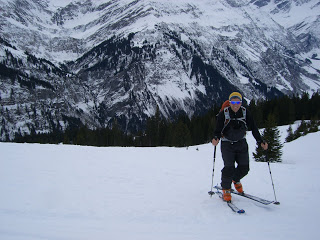 At mid-January, my long run is 6.5 hours with a race-weight backpack (20lb/9kg). My body is adapting well to the volume and weighted run — I can’t say that it’s especially easy though! Recently I’ve also started my heat acclimatization regime — more on this in a later posting. I can never focus too much on nutrition — so far it’s going well, but I know that it’s getting even more important to stay on top of this to support the final two months of training.

This just about catches us up now! I’ll expand on some of the training techniques in future postings. I hope that you’re enjoying your wintertime (or summertime) wherever you are in the world!

Jeff Grant is the author of Flow State Runner: Activate a Powerful Inner Coach’s Voice, Hill Running: Survive & Thrive, Run Faster: Unlock Your Speed in 8 Weeks, Running Heavy, and UltraRunning: Ultimate Guide. Based in Switzerland, Jeff is a coach and writer who specializes in mental coaching, peak performance, and transformation. He is also a Co-Founder of BridgeX Teams LLC, a global virtual team building company. Jeff’s popular newsletter is a digest containing inspirational and instructional resources, including his latest content. See recent issues and subscribe for free here. Refer to Jeff’s bio for more information, and please check out Jeff’s Coach & Author page on Facebook.

Stage 4 results are in!
Hillseeker® Mental Toughness Series "Other People" -- Level 3 In their Honor
Stages 1-3: How could we have underestimated this challenge?
Stage 3 in the Desert
Final preparations: What have I gotten myself into?
Tags:Marathon des Sables

My passion is in coaching--in helping people unlock their potential and break through cycles of stress, overload, and inaction. Here you'll find my collection of motivational content, coaching articles, books, and other services. Read more

Let's Talk! Book a free 15min intro talk or purchase a 1-hour coaching session on Zoom. No need to write me first: simply follow the link below to book a session directly into my calendar.
https://calendly.com/jeffgrant

Check out this new virtual team building company I co-founded!